How to Choose a Backcountry Ski - 2017 Update

How to Choose a Backcountry Ski

Choosing the perfect backcountry ski is a daunting task these days. Ski design has gone through a dramatic evolution over the past ten years. You could argue that this dramatic evolution has been going on for the last twenty years, but the most recent developments in this evolution have had a major influence on how well skis perform in the backcountry. So what are these improvements and how do we decide what’s important and what’s just ski industry marketing hype?  The most important aspects to focus on when looking at a backcountry ski are: 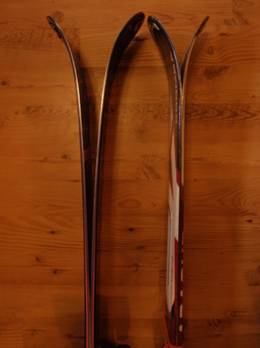 Rocker, reverse-camber, early-rise, splay, whatever you want to call it, it’s more than just marketing hype.  This is a game changer when it comes to ski performance in the backcountry.

So what is it? A ski with rocker is bent toward the topsheet, or has what you would call reverse camber (picture the legs of a rocking chair).  This can be in both the tip and the tail, just the tip or throughout the entire ski. In the picture (to the right) you can see the comparison between a ski with significant rocker (2010 K2 Obsethed on the left) to a ski with zero rocker (2007 K2 Coomba on the right). This change in camber allows the ski to float effortlessly in powder and helps ease turn initiation.The other major benefit of rocker is that it allows the skier to stay centered on the ski. Before tip rocker and wide skis, you often had to ski with your weight on your heels, or in the back seat, in order to avoid going over the handle bars when skiing deep or variable backcountry snow. This not only burned your quads but also made it difficult to finish the turn because all of the weight was on the tail of the ski.  This would prevent the skier from being able to feather the turn and change the turn shape.  Now, with a rockered ski, you can stay more centered and ski deep and variable snow with confidence and ease. 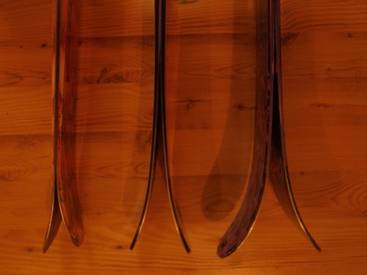 Many skis these days offer rocker in both the tip and the tail. While true twin tipped skis (like the skis on the right in the picture to the right) are meant for skiing backwards, rocker in the tail serves a different purpose.  Its main purpose is to help ease the finish of the turn. More tail rocker means a “looser tail”, providing a more “surfy” feel to the ski. Many backcountry skiers prefer to have a flat tail with no rocker. A ski with a flat tail makes certain types of kick turns easier and makes the ski more useful for snow anchors both for rope work and for quick security on steep slopes. We prefer a happy medium -- some tail rocker but with square tail profile (which helps keep skin clips on and makes it easier to shove the tail into the snow during kick turns). 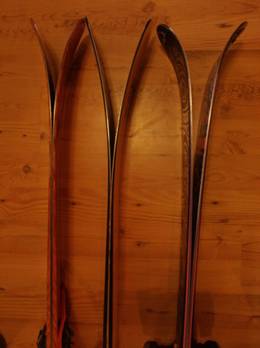 The amount of rocker will vary from ski to ski.  The picture on the right shows three different skis with three different amounts of rocker. How much is enough? That’s a tough question to answer. It all depends on skier preferences, flex patterns, tip shape, etc… etc…  It’s a question that most ski manufactures are trying to answer themselves. Just make sure your next backcountry ski has some rocker. 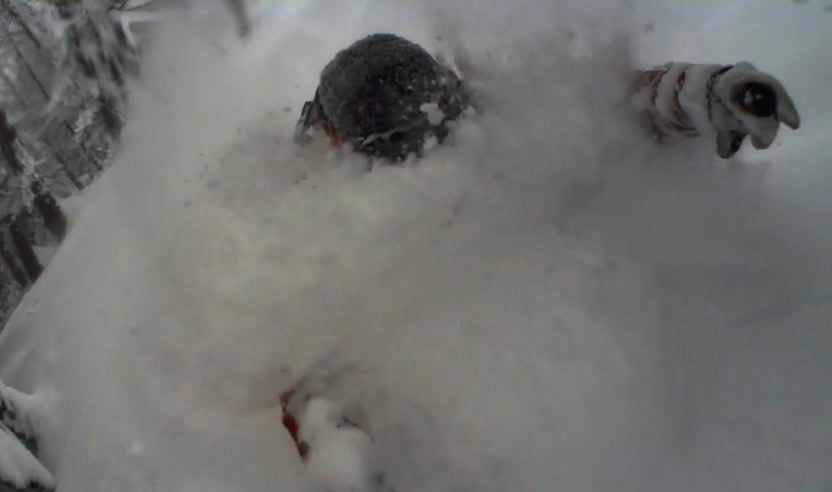 …..when it comes to ski performance in soft and variable snow.  A wide ski allows the ski to plane to the surface faster and easier. This helps provide a more forgiving platform and allows easier turn initiation and finish.  It also allows the backcountry skier the option of skiing low angle terrain when the avalanche danger is high because the increased floatation equates to increased speed (when desired).

Increased width does come at a price. More width means more weight and more skin drag on the uptrack.  Finding a balance between wide enough but not overkill will come down to personal preference. For example, Jeff’s preferred mid-winter touring skis are in the 110 to 120 mm range underfoot, while Larry’s preferred skis are in the 95 to 110 range.

Shape – It’s not all about side cut these days.
Back in the mid-90’s “shaped” skis revolutionized the ski industry. Increase side cut (picture a ski shaped like an hourglass) made carving on firm snow much, much easier. While this is an advantage on firm or groomed snow, increased side cut does have some disadvantages in the backcountry.  A ski with dramatic side cut tends to be a little more “hooky” and unpredictable in soft or variable snow.

To address this issue some companies have gone as far as offering reverse side cut in their powder skis, where the waist is actually wider than the tip and tail.  Other companies offer skis that have “pin tails” where the ski is shaped more like a tear drop. The popular K2 Pontoon and DPS Lotus 138 (shown above) are good examples of this design. This creates a ski with an amazing amount of float and makes it nearly impossible to sink the tip.

The most popular shapes these days have been the shapes that mimic a ski with reverse side cut but have a small amount of traditional side cut underfoot to increase firm snow performance. The DPS Wailer 112 (shown above) and Armada JJ are good examples of this design.

Weight– It’s all about the down but you have to get up the thing first. 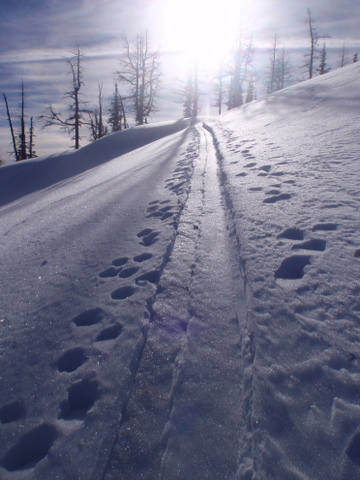 Well, here comes some of the bad news. While wider may be better, wider usually means heavier. Luckily advances in ski construction technology have helped. With a sizable increase in the backcountry skiing population over the past ten years, the ski industry has more motivation to decrease the weight of their skis.  Many companies are starting to incorporate carbon fiber and lighter weight wood cores in an effort to decrease weight. At times this can produce a ski with decreased performance but many companies have found a good balance between weight and performance. Here are a few tips that might help you decrease the weight/increase efficiency while still enjoying the benefits of a fat ski:

Conclusion
While all of these technological advances are making it more confusing to pick out the perfect backcountry ski, these advances are increasing the enjoyment in an activity that was pretty enjoyable to begin with – backcountry skiing. If you take these four factors into account when shopping for you next pair of skis – rocker, width, shape and weight, you will likely end up with a great pair of backcountry fun sticks.

What the guides are skiing on this year

To help you get an idea of the type of skis we are talking about, here is what the guides are skiing on these days:

~Jeff: 5’9″, 150 lbs, 44 years old. Ex- ski instructor and ski racer. Prefers a surfy, playful ski as opposed to a beefy plank.  Like many of the guides Jeff has a large selection of skis for a variety of conditions, with rocker being a common theme throughout the quiver. Once again this year Jeff will be touring on the DPS Wailer 112 (tip and tail rocker).  eff can’t stop raving about this versatile ski. When using the lifts or the helicopter Jeff will be choosing between a pair of K2 Pontoons (reverse camber) and K2 Shreditor 112 (twin tipped with tip and tail rocker). For boots Jeff tours with the Dynafit TLT 6 Performance.

~Josh: 5’8″, 155lbs, aggressive skier that likes speed and longer radius turns. I have a bit of a DPS addiction which has resulted in some marital disputes (now resolved since I bought my wife a pair)...

For fast and light missions and spring touring I employ a pair of DPS Cassier 95 Tour 1 skis with Dynafit tlt superlight bindings . For the deepest days, I just picked up the new DPS Lotus 124 Tour 1 which employs cap construction and a light core to keep ski weight very reasonable for that much floatation. For everyday winter touring, I can't say enough positive things about the most hyped ski in recent years (and the ski I also think is the most versatile), the DPS Wailer 112 Pure3. Both the Lotus and the Wailer are paired with Dynafit TLT speed radical bindings, which are light, simple and work well if you're willing to go brake-less.

For boots, I have a pair of Dynafit TLT 6's that are a few seasons old and need to be retired. I think they've been a fantastic boot and I'm cruxing over what to replace them with this season (Dynafit has discontinued the TLT 6 carbon and I'm just not sure about the TLT7 yet). I spent some time testing Arc'Teryx's revolutionary Procline boot (see my review here), and while it isn't my pick for a mid-winter powder crusher, it certainly would be a top pick if you spend most of your time in spring conditions or on long tours where weight and mobility are paramount.

~ Larry: This year I will be skiing in the DPS wailer 112 in the Tour 1 construction.  he Wailer will go down as one the all time ski shapes and the 112 offers up a combination of playfulness and forgiveness rare to find in a ski. These are mounted with the Dynafit Radical st for their simplicity and longevity. Driving these will be the Dynafit TLT6 boot,  perfect match for this lightweight, touring driven focus.

~ Drew: For skis, I am still using a pair of K2 Comeback 114's for a mid-winter touring ski. I feel like they are relatively light for their size, but solid and stable for high speed, large radius pow turns. For a spring mountaineering ski I am using a pair of DPS Wailer 106 (tour 1 construction). These are just incredibly light, but still hold a good edge on ice, sastrugi, and variable high-mountain snow. I go with a slightly fatter mountaineering ski, at 106 underfoot, as most spring trips seem to involve huge storms and deep snow skiing, with quality ranging from cold smoke to horrible mank. A wide waist helps with any of the above.

~Paul: likes fun skis that are old school wide, light and responsive. The graphics are also important but not as critical. So, the sticks for him over the last few seasons are a pair of 187 Dynafit Huscarans mounted with some Dynafit TLT's. This is a great all around set-up, perhaps not so great on the firmer stuff but that is a snow condition Paul attempts to avoid as much as possible. For boots, Paul is using a pair of Black Diamond Prime which offer plenty of boot yet are lightweight for all that up and trail breaking, and are pretty darn comfortable as well.